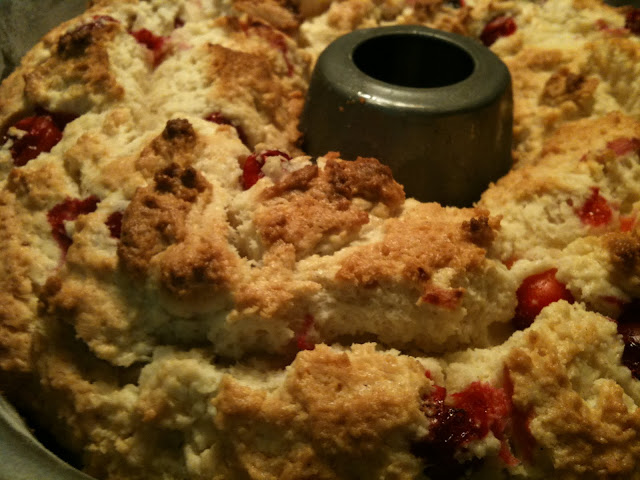 I received this recipe from my co-worker’s wife many years ago (when a recipe was written on index card ;-)  This cream cheese base cake has inspired me to make many wonderful butter cakes. Cream cheese is the magic ingredient that makes the cake a bit tangy and smells heavenly.  If you have kitchen aid, highly recommend you use it for this recipe. I have mixed this cake by hand and resulted in blaster in my hand because of the long creaming process.

Mix flour with nutmeg, salt & baking powder and set aside for later.

Put butter in the stand mixer bowl and use the paddle attachment.  Add half of the sugar and mix until butter becomes airy and fluffy.   Then add the cream cheese and rest of sugar and continue to mix until cream cheese and completely incorporated into butter mixture and volume has doubled.  (remember to stop the mixer and scrape down the side at least a couple times).

Add 1/4 cup of flour to fresh cranberries. Toss to make sure  cranberries is well coated

Break the egg into mixing cup and add in the vanilla extract.  Lightly whisk the egg & vanilla then gradually add the egg to cream cheese & butter mixture.  Add slowly at first (a couple teaspoon), then pour in a steady slow stream.  Avoid over mixing because you will lose volume if you overbeat the eggs.

Stop mixer and finish the rest of the mixing by hand.   Dump all flour in at once and fold the flour into the batter.  Add in the cranberry and mix until it is eventually distributed.